Raimondo D’Aronco was born in Gemona del Friuli in 1857, the eldest of the seven children of Gerolamo D’Aronco (1825-1909), a building contractor, and Santa Venturini (1839-1879). After leaving primary school, he attended the local Arts and Crafts School for two years. He was a lively child whose unruly behaviour -his family nickname was Attila- might account for his father’s decision to punish him by taking him to Graz to be apprenticed to a master builder. The fourteen year-old Raimondo was deeply affected by this unexpected separation from his family and found it very difficult to cope vvith the real world at such an early age. Not surprisingly, this experience left a lasting mark on his life.

On his retum to Gemona in 1874, he worked for his father’s firm for a while and then did his military service (Engineer Corps in Turin in 1875-6). After that, he enrolled for the Ornamental Design and Architecture courses at the Venice Academy of Fine Arts (1877-78) where he attended the lessons of Giacomo Franco, a follower of Boito. Having successfully completed his studies, D’Aronco began vvorking for a busy schedule of competitions, which allowed him to stand out for his personal approach to architecture and the original and imaginative quality of his projects.

His first remarkable achievement in 1890 vvas the commission for the façade of the First Italian Architecture Exhibition in Turin, vvhere he also exhibited a selection of his works, which proved very successful. They were received with equal  favour at the 1892 and 1893 exhibitions. His works are strongly influenced by medieval architecture and show his special admiration for Viollet le Duc’s works. His aim to renew architecture led him to support the use of new materials, such as iron and glass.

On the Sultan’s request, the Italian government sent D’Aronco to İstanbul, vvhere he was commissioned the Ottoman National Exhibition. Even if the devastating earthquake vvhich ravaged the city on the 10 July 1894 put an end to this project, he vvas entrusted with different tasks by the Ottoman government. The Italian architect was appointed to different government commissions in charge of the spot inspections and the restoration of damaged buildings, while working at the remodelling of part of Yıldız Saray, the Sultan’s private residence. D’Aronco also contributed to the restoration of two important monuments in İstanbul, the Grand Bazaar and Aya Sophia, and entered into a four-year contract with the Ministry of Agriculture.

The projects he carried out at the tum of the century, such as Botter House, were much indebted to the French and Belgian Art Nouveau. Yet his main source of inspiration vvas VVien and,  above all, the stimulating experience of the Wagnerschule.

This house was built for the Sultan’s taylor, Jean Botter, a Dutchman, in Rue de Pera (now İstiklal Caddesi) in the heart of the city. The atelier and the shop occupy the ground floor with the apartments on the upper floors. The decorative apparatus, including the wrought iron of the balustrades and the door- and windowframes are definitely Art Nouveau and make this building the earliest relevant example of this style in İstanbul.

The area between the ground floor, mezzanine and first floor of the Botter house contained the studio, workshop and changing room and the storerooms of the Sultan’s tailor Jean Botter, whilst the remaining floors provided apartments for the family. This layout recalls that of the “Miethaus”, that is, the building for commercial and domestic use which developed in Vienna starting with the model of Otto Wagner’s Ankerhaus. This was further evolved in a proto rationalist sense by Max Fabiani in the Portois and Fix and Artaria buildings, as well as becoming a subject of study for the students of the Wagnerschule betvveen 1897 and 1901. Differently from the Viennese, D’Aronco did not interest himself in the research of the elaboration of the facades where the covering is a two-dimensional concept to be expressed in ceramic or marble, instead he insisted that the wall was a plastic and malleable element in which the decoration is interconnected with space and volume. 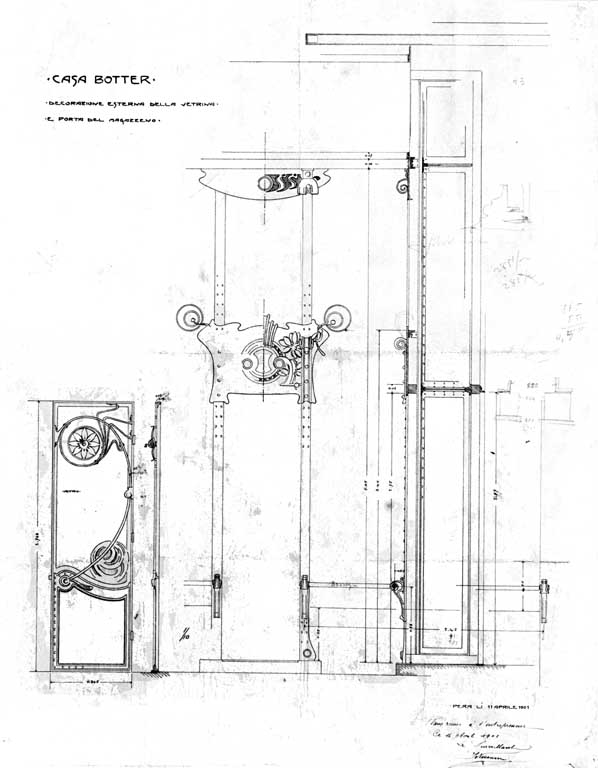 The ornamental elements of the Botter house from wrought iron on the balconies and doors, dominated by the celebrated “whiplash” motif, the strips and ribbons, the female heads, the flora  which invades the fascia used to frame the intermediate floors, to the various elaborations dedicated to the theme of roses- represent the apex of D’Aronco’s research into the repertory of international Art Nouveau. The French-Belgium influence is prevalent in this phase, however it is tempered with the work of the Viennese Joseph Maria Olbrich, a model D’Aronco constantly referred to.  His participation in international and European Art Nouveau evolved towards a re-evaluation of Islamic and Ottoman art. He combined this with the modern elaborations of the Central European architectural culture, where the fascination for the orient was one of the central pillars for the research of a number of the principal figures.