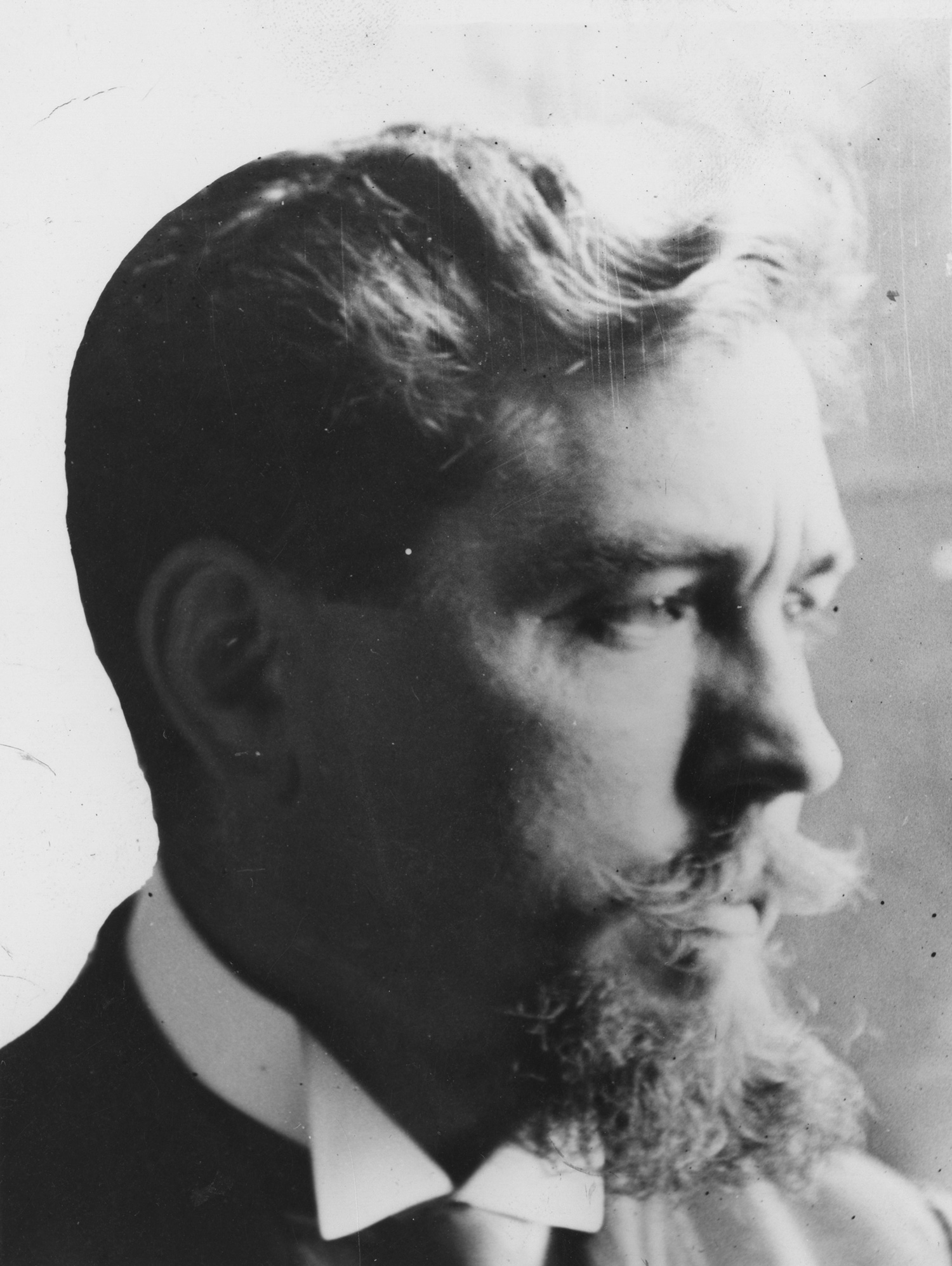 The Ottoman administration’s initiatives -based on Western models- to “modernize” the traditional organic urban fabric which had developed in the Empire’s capital over the centuries can be dated as far back as the reign of Sultan Selim III (1789- 1808).

Invited to İstanbul during the final years of Atatürk’s presidency (1922-1938) to create the Master Plan of the city, Henri Prost was one of the leading urbanists of the period. In approaching İstanbul, a city he had come to know and hold in high regard since the early days of his youth, Prost aimed to protect and preserve the unique topography, fabric and architectural monuments of the city, while striving to introduce harmonic solutions to a number of problems such as furnishing the city with the modern infrastructure that it had long been deprived of, providing the necessary conditions of hygiene, alleviating

traffic, creating recreational areas, and bringing to fore structures of historic/cultural importance. Starting with the Historic Peninsula, a portion of the propositions Prost developed for Galata-Beyoğlu and Eyüp districts were implemented later during the period in which the Democratic Party was in power (1950-1960), whereas others were simply shelved. 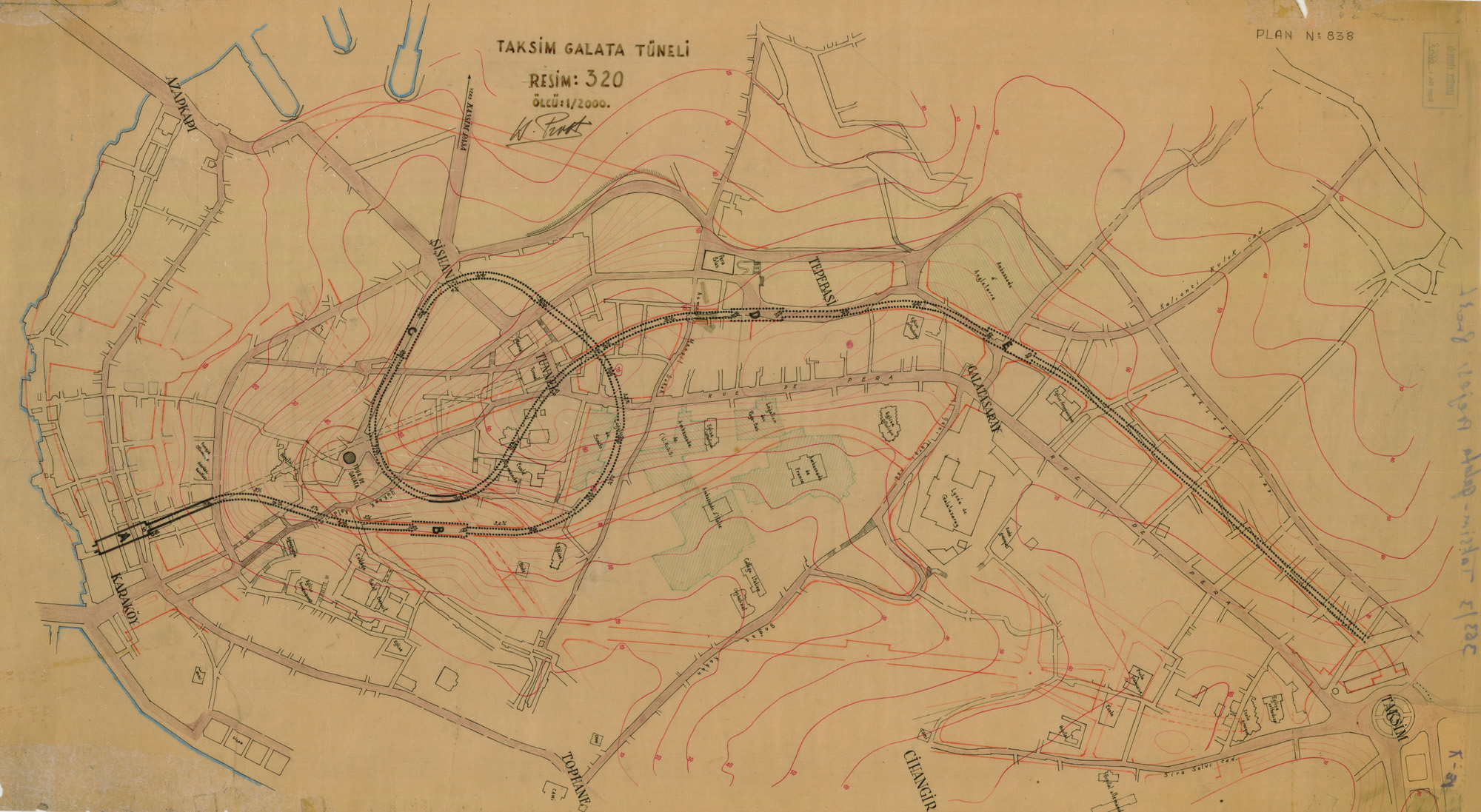 Urban Transportation and the Metro Project *

Putting emphasis on individual freedom, in his plans for İstanbul, Henri Prost proposed to create a major spine composed of motorways, with a new transportation network. In his reports dated 1936, he had studied the best possible locations for building a bridge across the Bosphorus and suggested that the point between  Rumelihisarı and Anadolu Hisarı was best suited for such an endeavor. Yet, he concluded that the project was not feasible under the given conditions. He thus opted to facilitate the flow of traffic between the two sides of the Bosphorus by means of ferry boats; he sought alternative locations for ferry ports and made port arrangements in Kabataş and Üsküdar.

With a view to introducing effective solutions to public transportations across the sprawling urban space of İstanbul, Prost drafted a detailed report that addressed the question of trams, buses, trolley buses, metro, and intercity transportation under separate headings. In this report, he noted that the tram lines had to be removed from İstanbul to prevent the traffic jam they caused. Running alongside automobiles, the tramway tracks were laid on the axes of the roads, which caused difficulties for pedestrians to cross vehicle traffic. Taking into consideration the fact thatTurkey was not an oil-producing country, Prost had concluded that trams should be replaced by electrically-operated trolley bus lines and he conducted studies in this respect. However, the most effective and most rapid solution for transportation and traffic congestion across the streets and avenues of the city was the construction of a metro system. 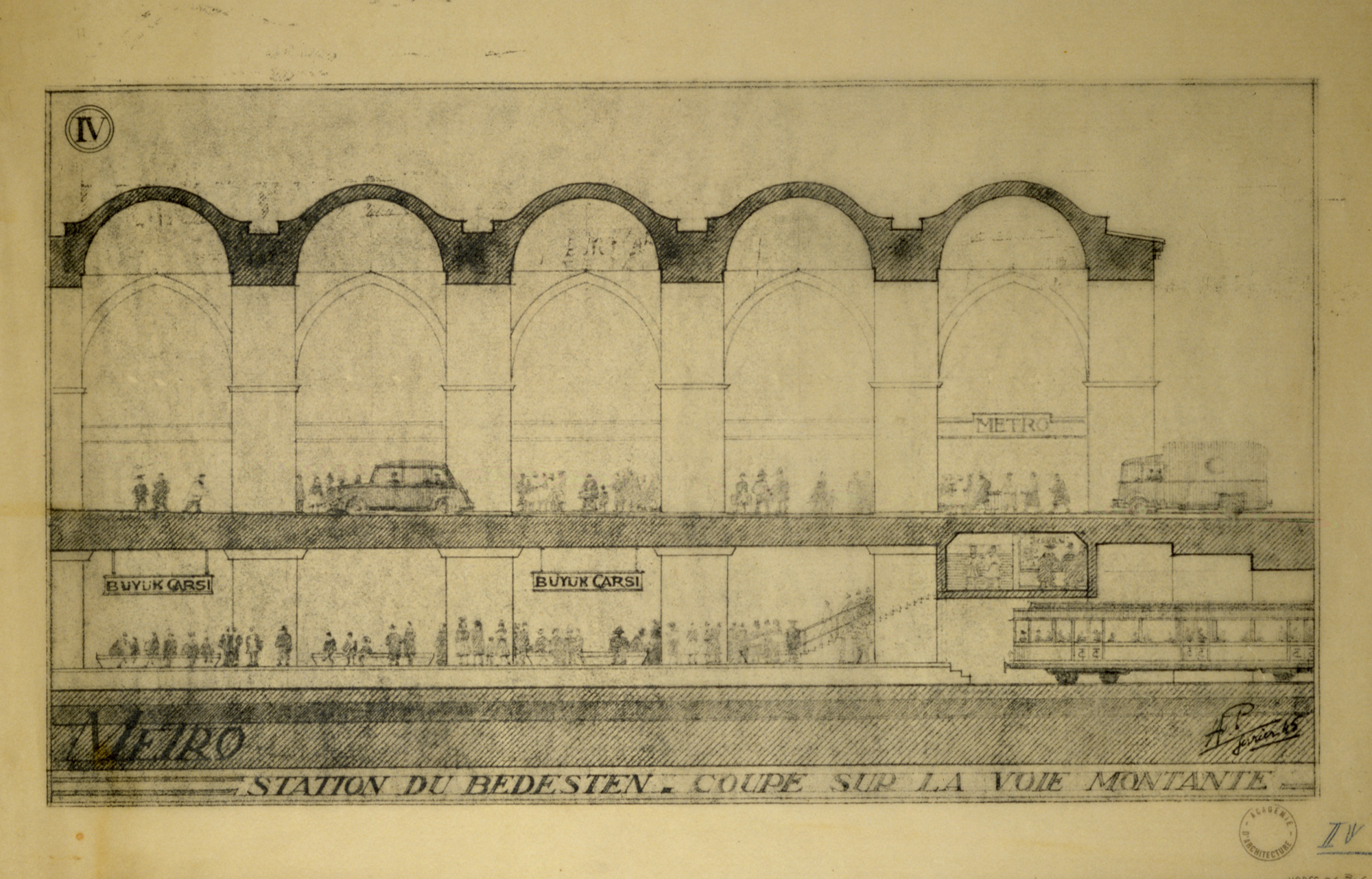 Although Prost foresaw the costliness of a metro system in a city with an eventful topography such as İstanbul, he conducted studies on the possible subway lines and the location of metro stations in relation with his plans. His detailed studies on the subway line were focused on three distinct areas: between Yedikule and Eminönü, the crossing of theGolden Horn, and between Karaköy and Taksim. In order to provide the rapid transfer of commuter train passengers to metro lines, he initiated the subway line in Yedikule, on theHistoricPeninsula. Following the former railway route, the metro line would reachAtatürk Boulevardand from there toBeyazıt Square. After running from Beyazıt to Eminönü via Yeniçeriler Caddesi, the metro line would pass next to the Grand Bazaar and below Mahmutpaşa Yokuşu and descend to Eminönü. The installation of the Grand Bazaar Station below the historic Bedesten was one of the most intriguing features of Prost’s metro project. The urbanist’s notion of integrating modern transportation technology with a historic structure was once again manifested clearly in this solution.

According to Prost, the most complicated portion of the metro project was the Golden Horncrossing. After having deliberated four different alternatives for the metro line to cross the Golden Horn, the urbanist primarily focused on two possibilities: A bridge from Eminönü to Karaköy or an underwater suspension tunnel 10 m below sea level that would allow ships to cross. While Prost did not prefer an aerial bridge as it would obstruct the silhouette of the Historic Peninsula, and particularly that of Süleymaniye when viewed from the Golden Horn, he nonetheless reviewed separately how these two alternative lines would access the Grand Bazaar and Beyazıt via Eminönü. In the option of traversing theGolden Horn via a submerged tunnel, the metro line would run from Eminönü, follow the new road to be opened in the continuation of Tahmis Caddesi and Mahmut Paşa Yokuşu, and finally reach Çakmakcılar Station. Accordingly, the Eminönü Station was to be located near the new bridge, providing easy access for metro passengers to reach the boats. (Cat. no. 28) In the second alternative of traversing theGolden Horn with a bridge, Prost found that the aesthetic views of Süleymaniye, Rüstem Paşa Mosque and Yeni Cami (Mosque) had to be well preserved. Accordingly, both Eminönü and Çakmakçılar Stations were to be built on 10 and 8 m-high viaducts, respectively, and, following the new road –in the continuation of Mahmut Paşa Yokuşu- and Financılar Caddesi, it would enter the tunnel. 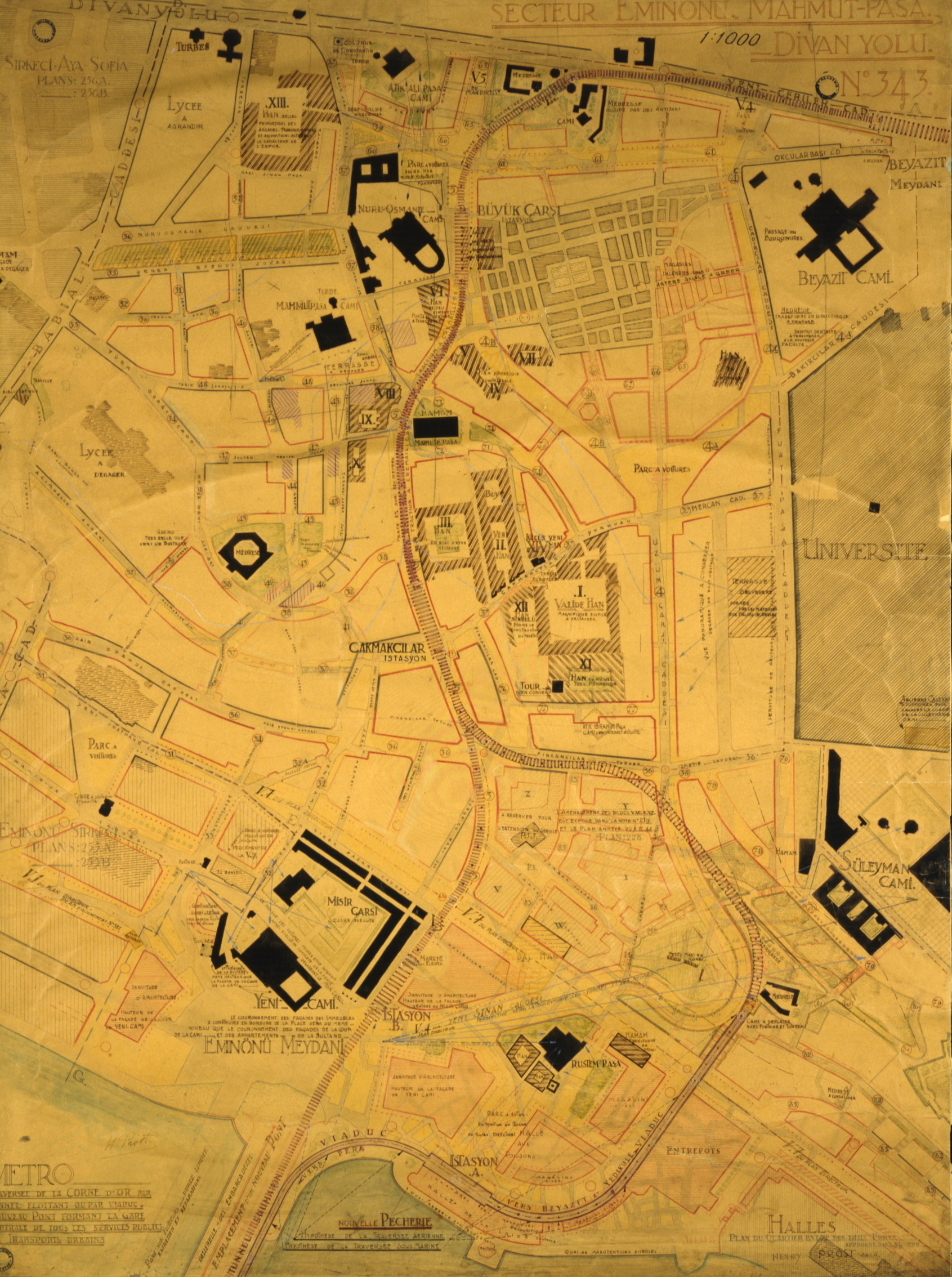 Another problematic zone on the metro line was the section between Galata and Beyoğlu. Once having reached Şişhane from the Golden Horn, reaching Beyoğlu level for the metro line was a problem that needed to be resolved for metro cars that could not ascend a certain slope. Therefore, it was projected that the metro tunnel would ascend the slope in a helicoid curve . The advantage of this solution was the possibility to construct two stations near Şişhane and in Beyoğlu. A second solution was to opt for a mechanical system employed in Switzerlandto build a line that would directly cross the 600-meter level difference in the direction of the historic tunnel. From this point onwards, the metro line would travel first to Tünel Squareand to Tepebaşı, and reach Taksim by passing behind the British Embassy and following the new avenue (Tarlabaşı Caddesi) that would be opened parallel to İstiklâl Caddesi.

Hence, the main spine created with two main motorways between Yenikapı and Taksim, namely the city’s historic center in the south and its new center in the north, would be supplemented by an underground metro line as well. It is important to note that the present metro line, the construction of which was only initiated in the wake of the 21st century, follows approximately the same route proposed by Prost.

* Taken from F. Cana Bilsel’s article in the exhibition catalogue From the Capital of the Empire to the Modern City of the Republic.