*This post is compiled from Prof. Dr. Cânâ Bilsel’s articles in the From the Capital of the Empire to the Modern City of the Republic: Henri Prost’s İstanbul Plans (1936-1951) exhibition catalogue.

While Henri Prost was still working on the planning of the Paris metropolitan area as the “chief urbanist” of the capital, he was invited by the İstanbul Municipality in 1933 to participate in the restricted competition held for the planning work of İstanbul and soon thereafter, in 1935, to directly preside over the city’s planning work. The French urbanist was to remain in this position until the end of 1950. Prost’s planning work is distinguished by a planning approach in which the protection of historic and natural sites around İstanbul and the technological infrastructure demanded by a modern metropolis are policies developed simultaneously. 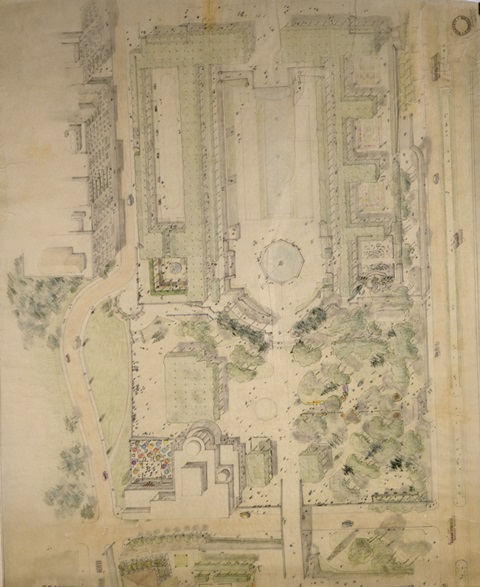 Green areas were regarded as an indispensible prerequisite of creating “healthy cities” in the town planning approaches developed during the first half of the 20thcentury. Yet, the notion of free spaces (les espaces libres) that Prost frequently used in his reports encompassed all public open spaces, including parks, promenades, esplanades, panoramic terraces, boulevards, as well as sports areas. In the İstanbul European Side Master Plan, large parks at the heart of the Historic Peninsula -around Bayrampaşa Creek- and the new development areas in the north -Taksim İnönü Promenade and Park Number 2 (Maçka Park – Lütfi Kırdar Sports and Exhibition Hall – the Open Air Harbiye Amphitheater)- stood out as areas intended for the transformation of the urban environment around them.

The Armenian Cemetery between Taksim and Maçka and the old military properties were initially to be designated as a new settlement area. In this quarter, Prost designed the Park No.2 inconjunction with the new settlement. A second area to be opened for settlement was the valley between Maçka and Beşiktaş, whereas a third was the area that descended from the slopes of Kurtuluş to Kasımpaşa. A new viaduct to be constructed was to connect this new settlement directly to Taksim.

A terrace opening up to Taksim Square and an esplanade in its continuation were designed in the large space that emerged after Taksim Barracks was demolished. The steps at theTaksim Squareentrance of İnönü Esplanade, as well as the wide terrace rising above the steps were designed to offer a view of the ceremonies held at the square and to create a monumental entrance to the park. The park continued with a geometrically designed esplanade and ended with Taksim Garden. Contrasting with the geometrical layout of the esplanade,TaksimGardenwas designed in a free style with meandering roads. Designed in the Modern style by Rüknettin Güney, Taksim Gazinosu (Municipal Club) was built on the northeastern corner of this park.TaksimGardenwas connected to Park No. 2 with a pedestrian bridge built in 1949. Hence, not intercepted by vehicle traffic, a promenade park was created at the center of the newly planned housing settlements. 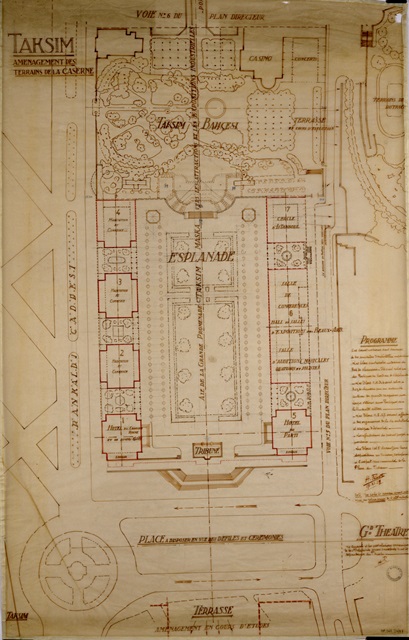 While the Taksim Promenade’s monumental entrance has been functioning as the terminal station of municipal buses, it is still possible to find traces of Henri Prost’s original design in the area. The Park No. 2, converted into a ConferenceValley, constitutes a green corridor within the city and encompasses important cultural structures of the city. However, the recently constructed tunnels and speed ways as well as the growing number of buildings sadly endanger the integrity of this park.