“We hope that these surveys and studies will contribute to a better knowledge and a better appreciation of the art of the city. [. . . ] Under the pure and radiant light of the East, stone, marble, and brick seem, despite everything, to give voice to their pleasure in having been called in some manner to participate in the dignity of the spirit and to render immortal a stage of human life in its search for the divine.”

In these words Jean Ebersolt summarizes the aspirations of his publication (Les églises de Constantinople, Paris: Ernest Leroux, 1913) coauthored with Adolphe Thiers on the churches of Constantinople. Published in 1913, the book is the result of a series of expeditions conducted in 1907/8, 1910, and 1912, under the auspices of the Ministère de l’Instruction publique (today the Ministère de l’Éducation nationale) and the Académie des Inscriptions et Belles-Lettres. 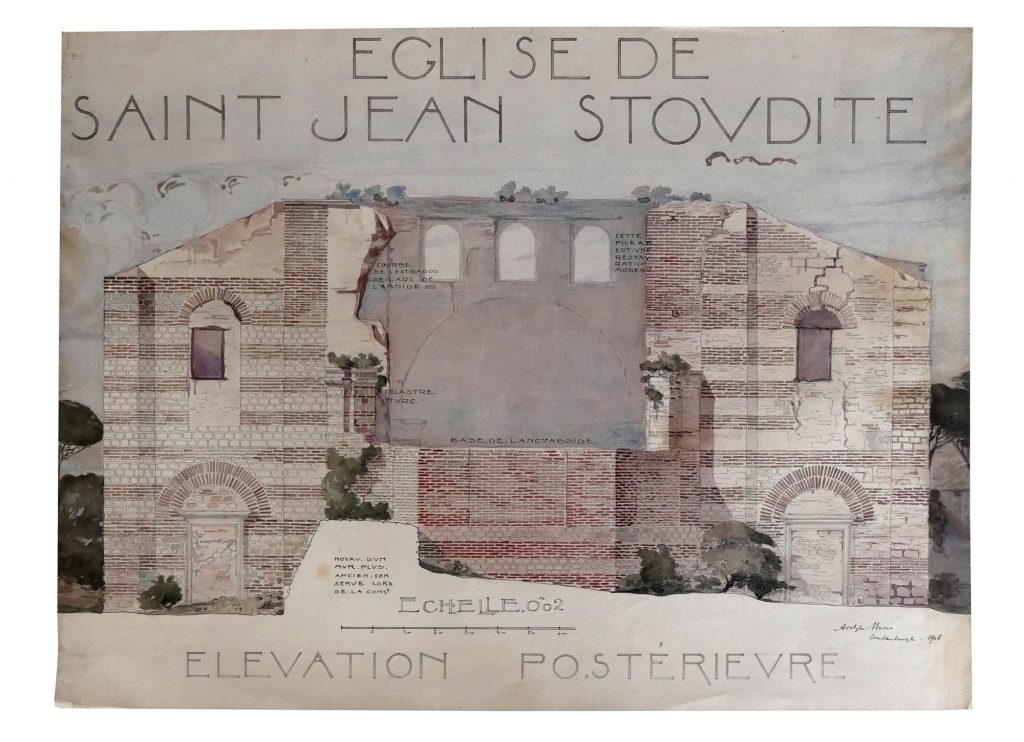 The primacy given to building surveys testifies to their importance in the eyes of the authors and to the effort devoted to documenting the experience of engaging with the vestiges of a world that fascinates and astonishes. Each line, each spot, each shadow—painstakingly recorded—is the imprint of a concentrated gaze that seeks to capture the design of the stonework and the traces of remodeling, lacunae, and degradations as elements of the décor of these buildings, mourned by the authors as “corpses wrapped in a shroud of lime” (cadavres enveloppés dans un linceul de chaux). Through the meticulous documentation that underlies the monographic studies devoted to thirteen churches of Constantinople, the authors aim to guide the eyes of the readers of these pages and plates with an intent that is both pedagogical and aesthetic. The sensitivity of the archaeologist Jean Ebersolt and of the architect Adolphe Thiers, a recent graduate of the École des Beaux-Arts, is combined with the taste for a refined elegance and firm and forceful lines that animated the intellectuals of their time. The layout of the legends in the austere graphic design, which joins hand-rendering with the rigor of industrial aesthetics, projects the survey of the past in the visual language of the present; their positivist precision, in the spirit of the time, seeks to offer the requisite accuracy to the study. They thus respond to the need to compensate for the acknowledged imperfections in the drawings previously published by travelers and scholars and to give an account of the interventions that had occurred in the meantime, such as those at the monastery of Stoudios with the construction of a “rough wall closing the narthex that has robbed the facade of its ancient character” (mur grossier fermant le narthex et qui a enlevé à la façade son ancien caractère [p. 6 n. 2]). 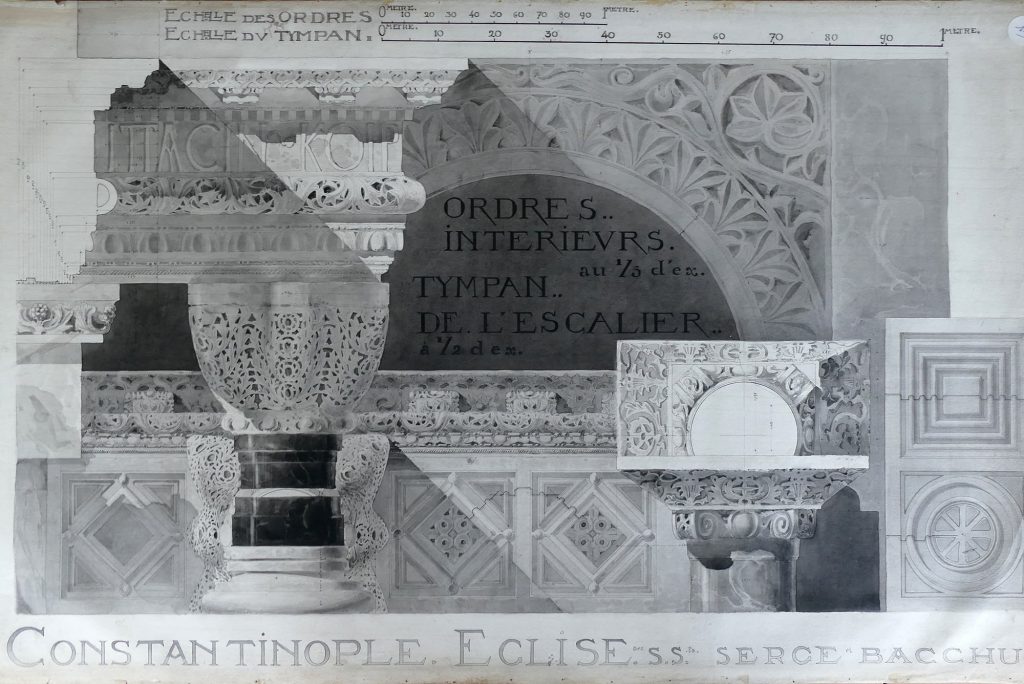 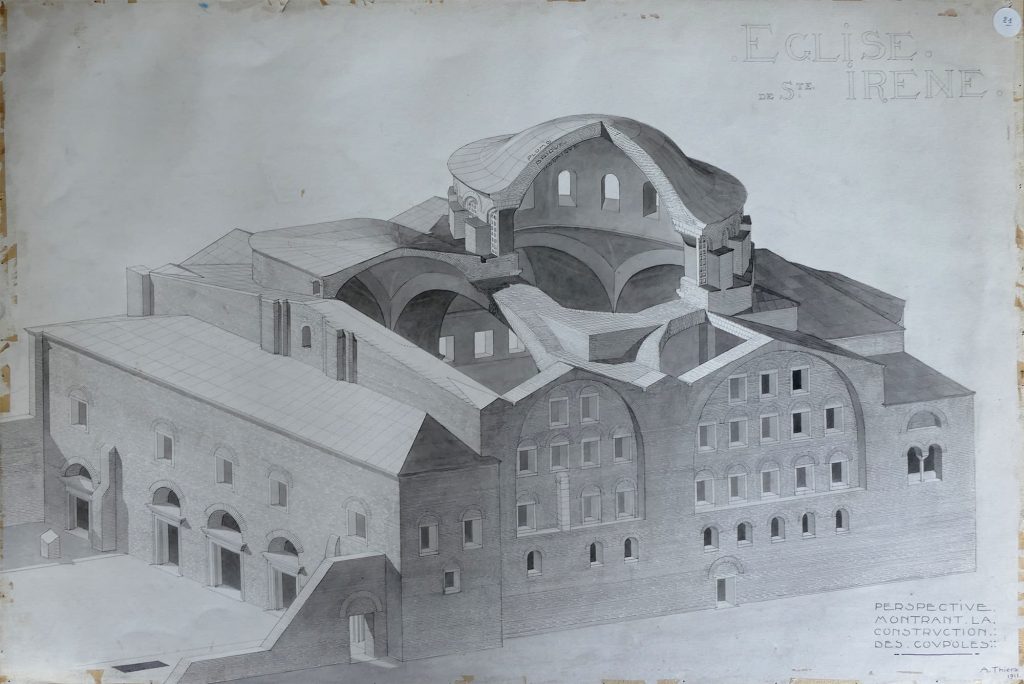 The gathering of the surveys in a separate volume, while the photographs and other small-scale drawings—usually simple sketches or rough line drawings also of a modern character—accompany the text, seems to reflect the documentation method: the surveys consist of the ground plan, elevations, cross sections, and elements of the ornamentation gathered in a single plate.

The bulk of the École Pratique des Hautes-Études’ (EPHE) Christian and Byzantine Collection consists of some of the illustrations relating to Stoudios Monastery, the churches of Saints Sergius and Bacchus and Saint Irene, Kilise Camii, Fenari Isa Camii, and Eski Imaret Camii. The surveys of seven other churches (St. Andrew in Krisei, Kalenderhane Camii, Gül Camii, Atik Mustapha Paşa Camii, Bodrum Camii, Zeyrek Camii, and Pammakaristos) are not represented, and the collection does not include any photographs or other elements used in the publication. 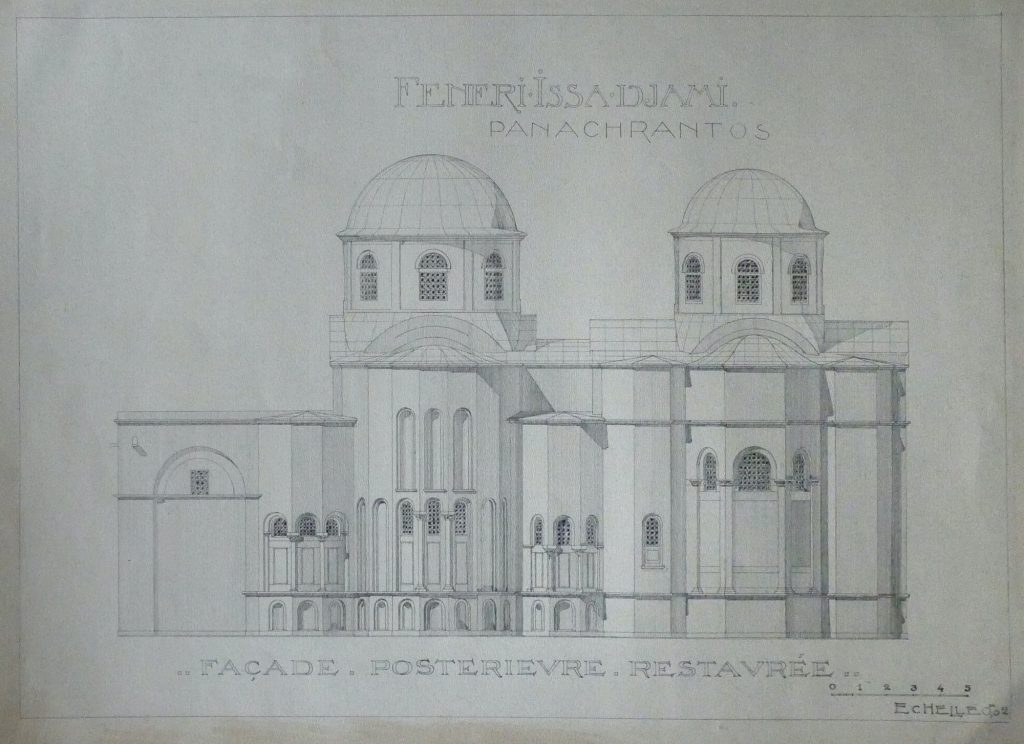 Whereas the conditions under which these drawings were entrusted to the EPHE remain obscure and the fate of the rest of the documentation unknown, the surviving originals presented in the exhibition shed new light on their materiality: their original dimensions and texture―flattened by their reproduction through engravings or rotogravure, however large and of good quality―capture with a remarkable accuracy the scale and spaces vibrant with light despite the ravages of time. 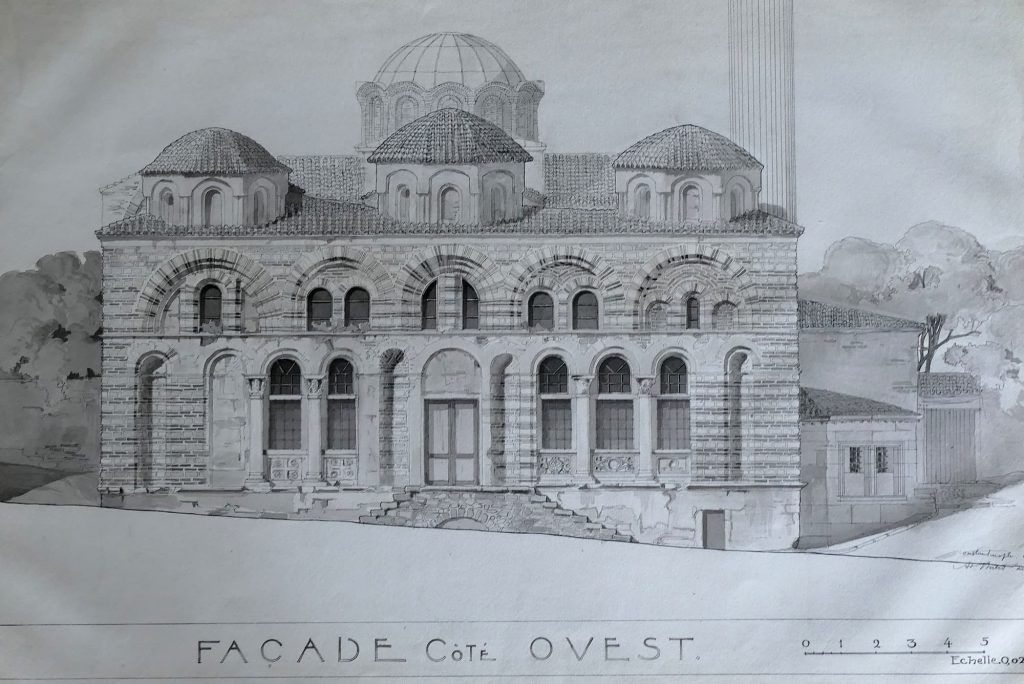 The drawings of the EPHE’s Christian and Byzantine Collection bring a new crispness to the plates volume of this historic publication. They restore to these rediscovered buildings an aspect of how they were perceived and reflect, alongside with 123 text figures (in all techniques) and the unnumbered end-of-chapter vignettes, the artistic sensitivity and the aesthetics of modernism.

*This article is published in From Istanbul to Byzantium: Paths to Rediscovery, 1800-1955 exhibition catalogue.

Cyril A. Mango An Englishman in Istanbul

A Grand World The Literary Figures of Robert...