Eis ten Polin, but Where is the City: Konstantios’ Istanbul

The geographical position of Istanbul was not always how we know it to be today. It has only been a little over a century since the 28th meridian east passed through Milion, the historical center of Constantinople. A piece of data we have about the location of Istanbul comes from a work of Konstantios, who served as the Greek Orthodox Patriarch from 1830 to 1834. First published in Greek in Venice in 1824, the work of Konstantios titled Old and New Constantinople narrates the history of Istanbul starting from the Ancient Greek colony Byzantion to Ottoman Kostantiniyye, and was translated into French, English, Karamanlidika and Ottoman Turkish in the  years following its first edition. Most of the work is focused on the city’s Byzantine period and the monuments erected by the Byzantines. The fact that the work was translated into so many languages spoken in the Ottoman Empire and beyond in the nineteenth century, when the academic circles first took an interest in Byzantine history, indicates the level of diversity in local interest in and the transimperial curiosity for the city’s history.

The work opens with Constantine’s military achievements, followed by how he captures Byzantion, names the city after himself and makes it the administrative center of the Roman Empire. Patriarch Konstantios also relates the reasons for the translation of imperial seat to Byzantion, which was initially named as Nova Roma (New Rome) with ceremonies held on May 11, 330 and later became eponymous with the Emperor Constantine. Considered as a much bolder step than those taken by his predecessors, Constantine’s decision is associated with the city’s strategic location and overall climate.

Right here in the text, Konstantios describes the location of Constantinople on the globe with a very modern scientific accuracy: The city is at the 41st latitude and 47th longitude. The fact that the longitude value given in the work is 47 instead of 28 as we know it to be today is indirectly related to some historical developments in the field of cartography occurred in Constantinople. 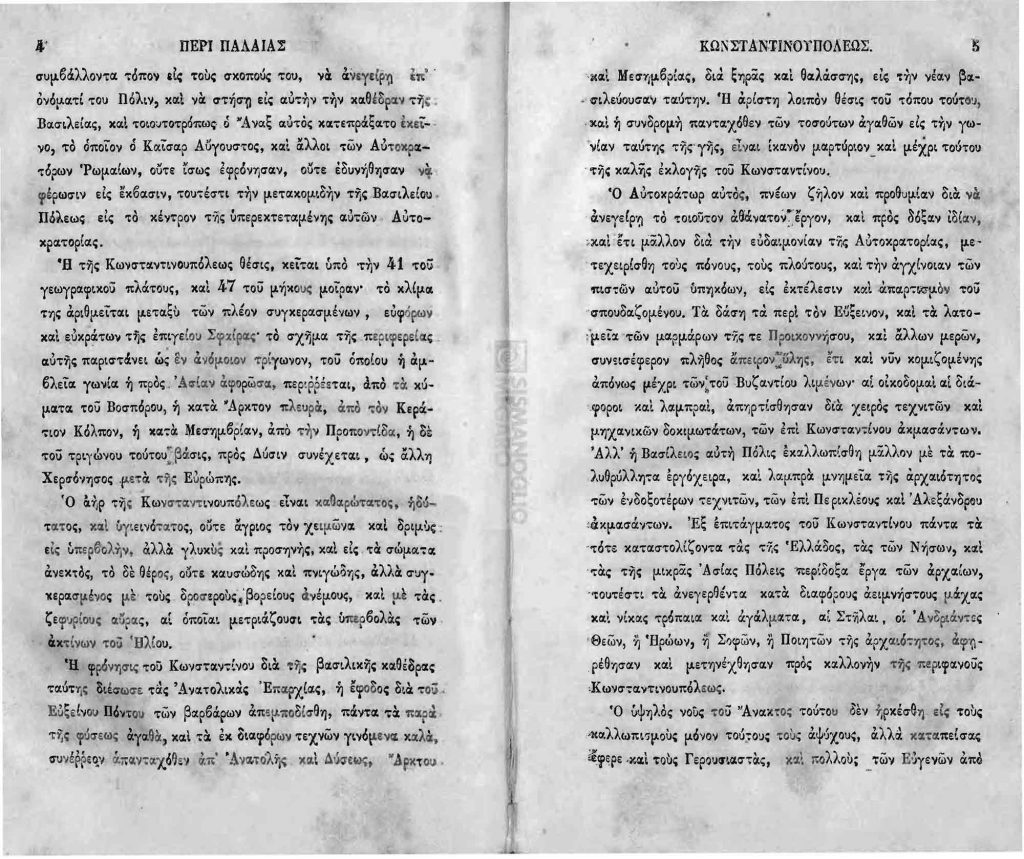 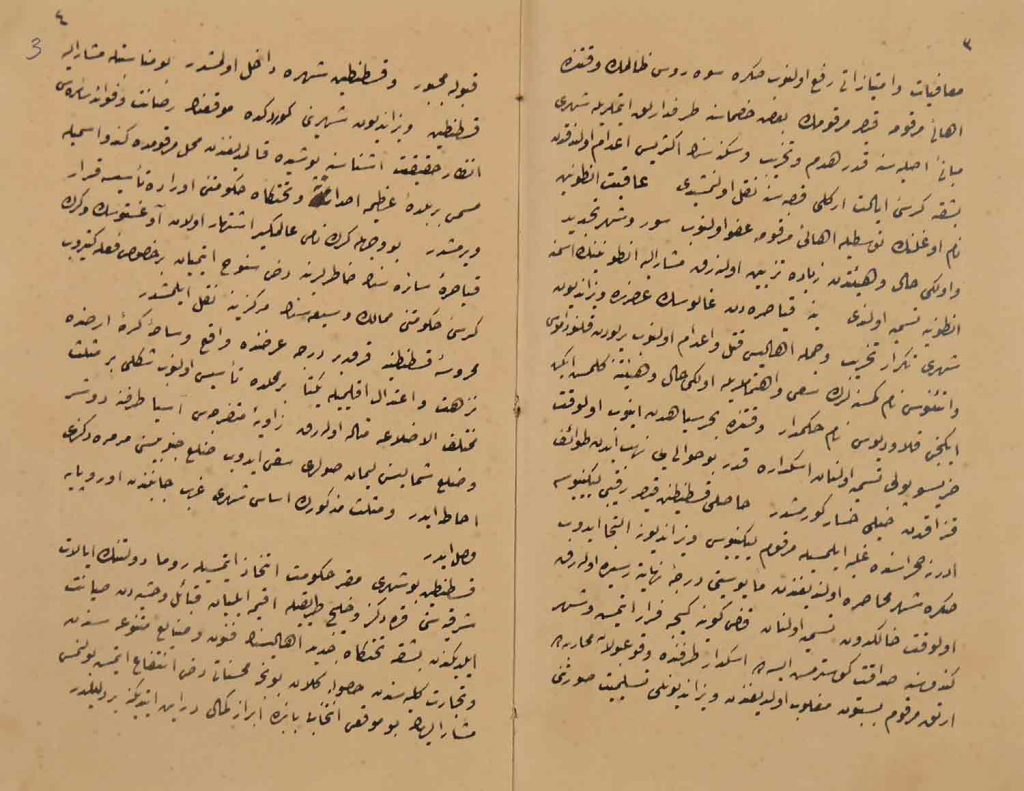 The source of this geographical information provided by Konstantios seems to be A map of the Mediterranean Sea, with the adjacent regions and seas in Europe, Asia, and Africa, which was published by William Faden in 1785 in London and was among the maps translated into Ottoman Turkish in 1803 with the title Cedid Atlas Tercümesi (meaning, literally, “A Translation of a New Atlas). fifty copies of this translation, a copy of which was given to Selim III as a gift, was printed following a redrawing of all the maps. In his map, Faden, who served as a royal cartographer during the reign of George III, King of Great Britain, had determined the Ferro Island, located in the westernmost part of the Canary Islands, and London, as prime meridians—though located at different longitudes—approximately one hundred years before Greenwich was chosen the prime meridian in 1884. Constantinople, on the other hand, was at the 47th meridian when the Ferro Island was accepted as the prime meridian.

William Faden, “A Map of the Mediterranean Sea with the Adjacent Regions and Seas in Europe, Asia and Africa” (London: William Faden, 1785). David Rumsey Map Collection.

The printing of this map in Istanbul is considered to be one of the earliest examples of the adoption of the popular scientific methods in Europe for data collection and mapping by Ottoman cartography. Thanks to the efforts of Mahmud Râif Efendi, who served in the retinue of Selim III’s London ambassador Yûsuf Âgâh Efendi, Faden’s map was brought to Istanbul and printed there. 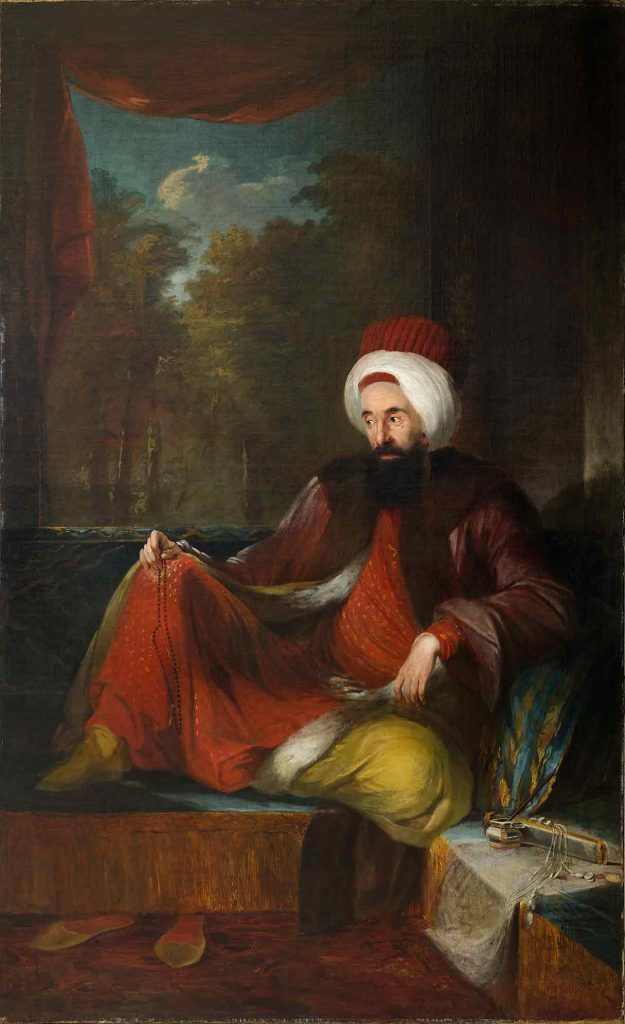 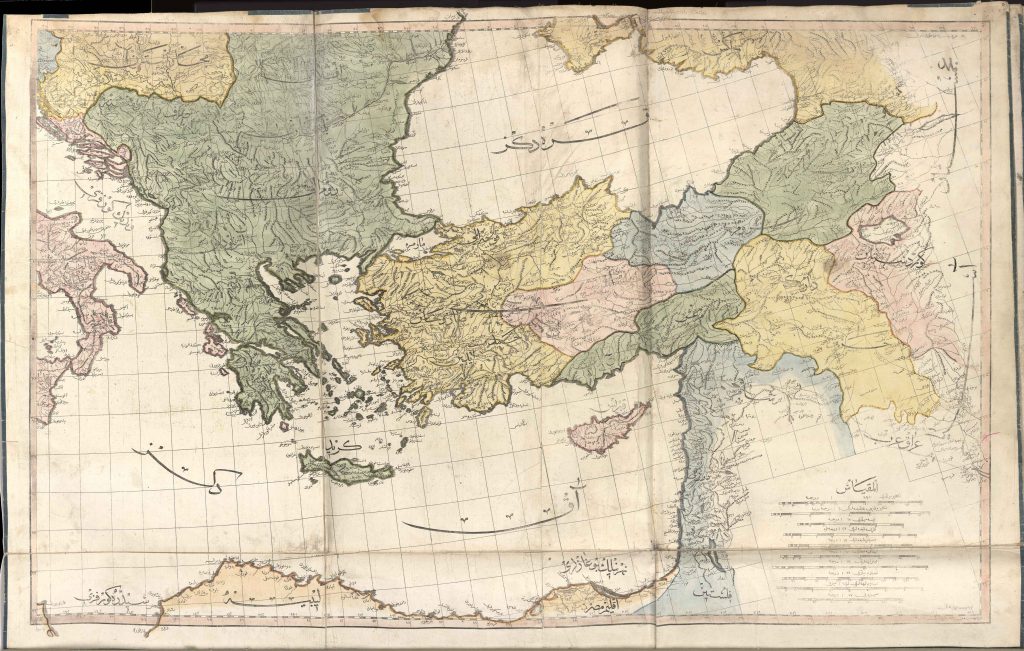 The idea that possibly led Faden to pass the prime meridian through the Ferro Island located on the westernmost point of the Canary Islands as he drew the map of the Mediterranean Sea in the late eighteenth century, points us in the direction of Constantinople’s history. Faden’s decision to use the Ferro Island as an alternative to London seems peculiar for the early modern period, when the European empires generally adopted their capital as the prime meridian, and the Ottoman Empire as well declared its capital as the 0 degrees longitude with the conquest of Constantinople. While Faden positioned the prime meridian only on London on the New York map he published in 1779 and on his other maps of various regions of the US, which he drew during the same period due to the American War of Independence, he, somewhat unexpectedly, added the Ferro Island for the map of the Mediterranean Sea. This hints at the idea that maps prepared with the instructions of Ptolemy (d. ca 170 CE), who had a major influence on the way the Mediterranean was perceived during the Renaissance, played a pivotal role in Faden’s decision. The mapping of Ptolemy’s Geography, which was frequently consulted by Abbasid cartographers in the ninth century, with the efforts of the monk Maximos Planoudes of Constantinople at the beginning of 1300, becomes popular in Italy one hundred years later. Planoudes was working in the Chora Monastery (Kariye Mosque) in the late 1200s, and reintroduced Ptolemy’s Geography to Byzantium, and his journeys increased the popularity of this work in Italy during the Renaissance. The work, which was translated and published for the first time in Latin by Jacopo d’Angelo in 1406, was based on the copies produced in Byzantium. While there are some copies of this map, including a copy in the Topkapı Palace, the first one is a part of a manuscript located at the Vatican Apostolic Library , registered with the code Urb. Gr. 82. The prime meridian of this ‘world map’—showing the Mediterranean basin as far as India—is the westernmost point of the Canary Islands, the western end of the known world. According to this map, although Byzantion is at a point between the 50th and 55th meridians, when the changes in map projections and the accurate measurements of distances are factored in, Faden’s map passes the prime meridian through the Ferro Island, as Ptolemy pointed out, and puts Constantinople at the 47th meridian. 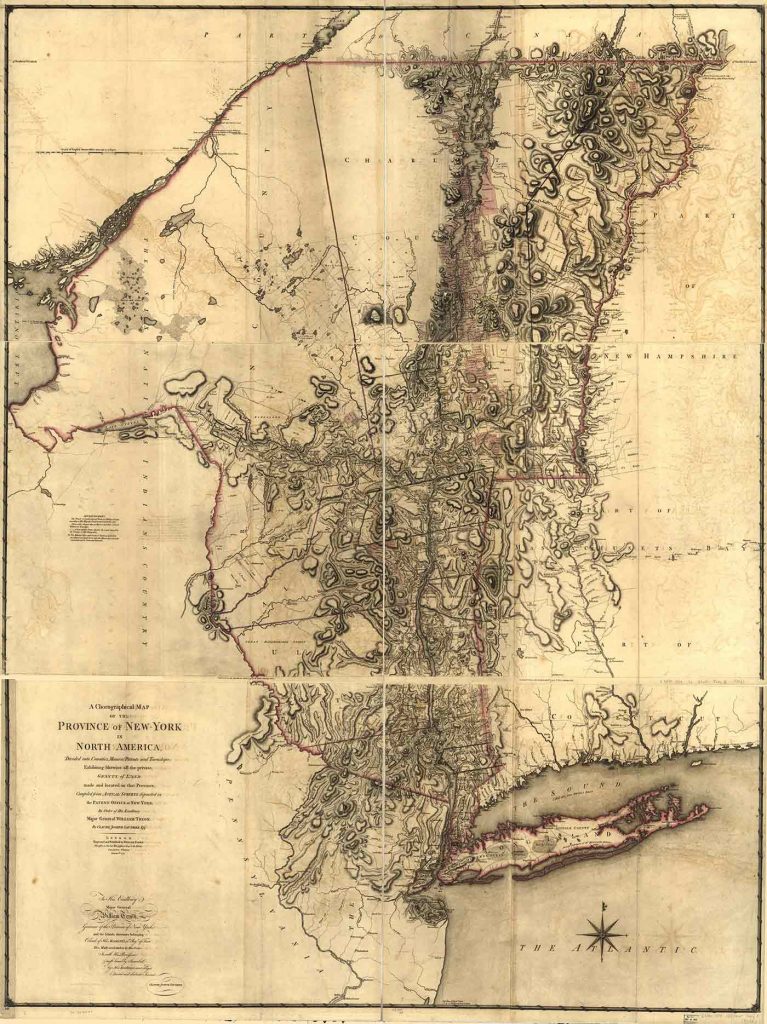 William Faden, “A Chorographical Map of the Province of New-York in North America, Divided into Counties, Manors, Patents and Townships; Exhibiting Likewise All the Private Grants of Land Made and Located in That Province.” London: 1779. https://www.loc.gov/item/74692647/. 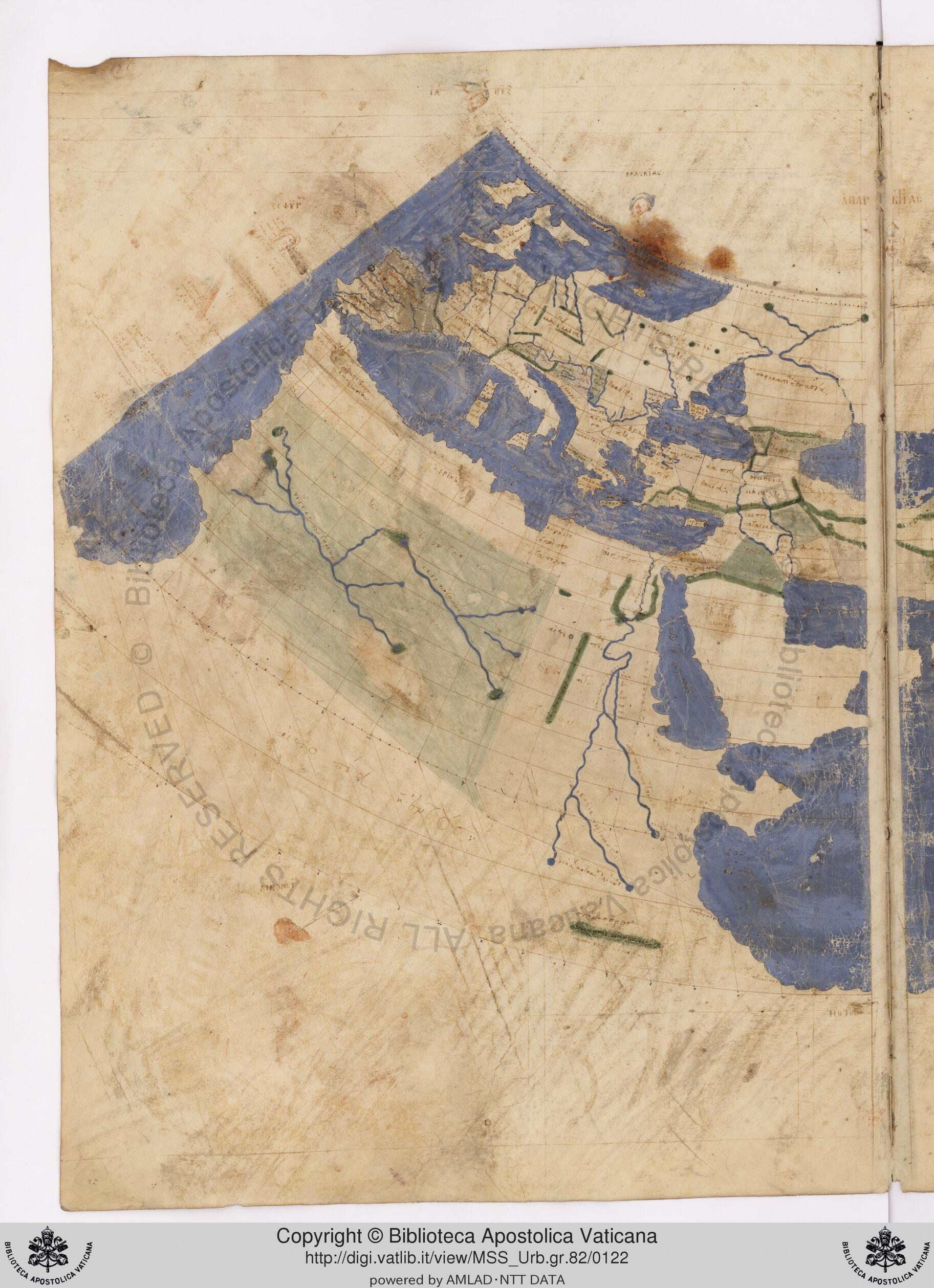 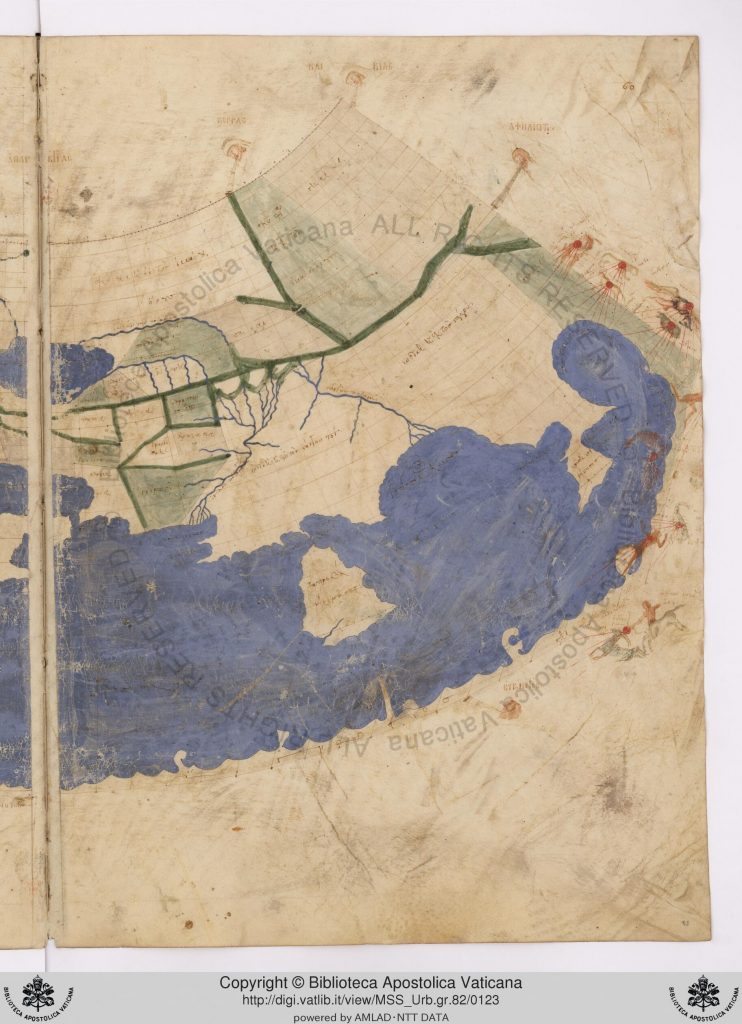 In Istanbul in 1824, while writing the history of the city, which was declared the imperial capital and named as New Rome on May 11, 330, Konstantios  wrote that the city is at the 41st latitude and 47th longitude. This very remark was a by-product of the influence of Faden’s 1785 map—and its 1803 translation into Turkish—which was prepared according to contemporary scientific methods along with the influence of geographical ideas that emerged in the ancient world. This new, yet chronologically and spatially meandering information that we encounter in a historical narrative is an example of the level of interest in history and the transimperial dissemination of scientific knowledge in the nineteenth century. In this world, where in a historical narrative it is possible to come across a small intersection of such a large spatial and chronological network that provides the circulation of information, the geographical position of Constantinople was also redefined.

I would like to thank K. Mehmet Kentel, the curator of the Memories of Humankind: Stories from the Ottoman Manuscripts  exhibition for bringing Konstantios’ text into my attention, and Firuzan Melike Sümertaş for sharing an early version of her transcription of the Tercüme-i Risale-i Heyet-i Sabıka-i Kostantiniyye.

From Hagia Sophia to Ayasofya: Architecture and The Persistence of Memory